The popular practice of tourism/travel photography and people's fascination with it has always interested me. This project can be seen as an approach to research and thus concerns various approaches about experimenting and researching photography in the context of popular capital city tourism. It investigates the tourist gaze/ socially constructed sites & sights, economy of places & attention.

The role of photography is instrumental for the research process, however, at the same time communicative. Vital was also self exposure as an artist, photographer and woman to provoke reactions to photographic activity.

The process has been mostly driven by photography bans and the encounter with police and guards - thus making attractions at seemingly public spaces unphotographable. The consequence would be a possible disappearance of photographic representation of places and reinforcement of existing subjects in touristic photoraphy on the other hand.

„new attraction“ investigates the visual constroction of a new tourist attractions through image politics: the huge olympic building site in the deprived East of London for the summer games 2012 is walled off from viewing to all sides. (Amateur) photographers got into trouble with security and police because they tried to take pictures - and triggered the We-are-photographers-no-terrorists campaign. However, there is a small section with a "View Tube" near the stadium which imagineers a stereotyped view of on the area (as can be observed through the analysis of uploaded photos on google maps and flickr).

This is exemplary for the multiple photography bans in the name of the terrorism act in the UK and the
successful PR strategy of how to look at the site. (exhibition poster installation)

Crowds mark the places as significant, but the more people at a place the more redundant its depiction becomes.

Through this approach I am considering the going-ons at such a site, narratives, uniting point-and-shoot practice & exposure bracketing - until the place nearly disappears through the systematic application of technology.

This follows up Spatial Sequences, but condenses the panoramic view and duration within one image. It is playing with the note of redundancy of photographic subjects and their fame. Certain landmarks are so famous that their photographic shadow is enough for their recognition. Exposing [duration = people x 1 second] several minutes usually without tripod (often not welcome), pointig at the subject and turning 360 degrees, a picturesque impression is left, the iconic sight is still imaginable.

Developed in Rome as a consequence of photography restrictions at one hand, and the staged character of attractions on the other hand. Especially Rome historically has elements of a theatre for tourists with the architecture being the background of tourist snaps. With collaborating tourists the white linen hides these iconic sights. The sight are (un)photographed and, thus, becoming unsights.
Public space is staged and hidden. Collaborators becoming part of the project. The event of photography is getting attention in return. (exhibition) 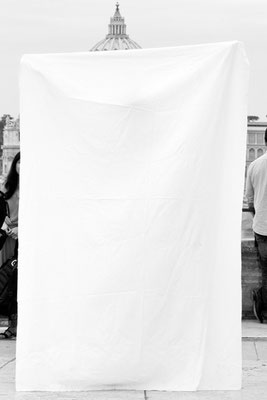 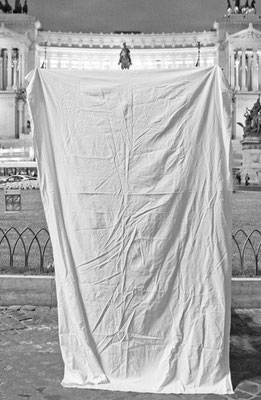 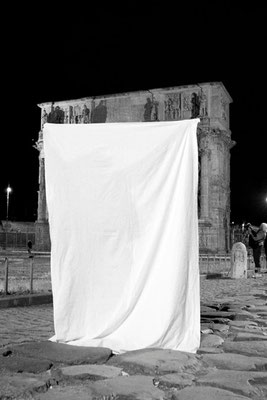